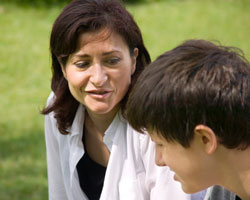 Independent reviewing officers (IROs)1are prevented from realising high quality planning for children in care due to the challenges of making the role work in practice, according to a research study published today by leading children’s charity the National Children’s Bureau and the Centre for Child and Family Research at Loughborough University.

All children in care have an IRO, an adult who has oversight of their care plan and is empowered to act on their behalf in challenging the local authority. The research confirmed that IROs can have a real impact on ensuring care plans are properly reviewed, and they can contribute to improved support and services for looked after children.

However, the research found that whilst there is consensus about the characteristics of an IRO service that is working well, there were challenges facing IROs when it came to translating theory into practice. High case loads, an inability to assert independence and confront poor practice, time constraints, a lack of resources and an expectation to conduct other duties outside the IRO remit, all contributed towards an inconsistent application of the IRO core duties as laid out in the 2011 statutory guidance. IROs expressed concerns that conflicting priorities risked looked after children ceasing to be the priority.

Senior managers were seen as vital in ensuring IROs felt supported and valued, but their commitment was not always evident; failure to deal with high caseloads and to provide effective mechanisms for dealing with concerns were seen as  a lack of senior management commitment to ensuring the service operates as intended. In addition, access to external sources of support varied greatly; such as the provision of independent legal advice or a dispute resolution protocol that worked.

Whilst those IROs directly employed by the local authority (95%) enjoyed numerous positive benefits from this association; such as an understanding of local authority context, some argued that this situation did not always allow IROs to work ‘independently’ of the organisation, creating a conflict of interest and in some instances hindering the IRO‘s ability to challenge the local authority on poor practice.  Participants described the true test of independence as IROs’ ability to both recognise when to challenge the LA on poor practice and their ability to do so.

The study recognised key elements which would help support an independent approach:

“Whilst there is clearly a theoretical understanding of what makes an Independent Reviewing Officer service successful, this study indicates that in practice, the IRO role in providing the best possible care planning is yet to be fully realized. We must ensure that IROs are supported to provide the high-quality service that children in the care system need, taking a child-centred approach and making sure that conflicting priorities or inadequate support do not put looked after children at risk of not being the priority.”

“Our research clearly sets out the key ingredients that are required to ensure IROs play an effective independent role that is always focused on achieving the best outcomes for every child in care. We must ensure these are widely promoted and that local authorities learn from each other in understanding how to deliver a high-quality service for all looked after children.”

‘The role of Independent Reviewing Officers (IROs) in England’ – is available at: www.ncb.org.uk/what-we-do/research/research-findings/reports/vulnerable-children-research-reports

The report was undertaken with funding provided by the Nuffield Foundation.