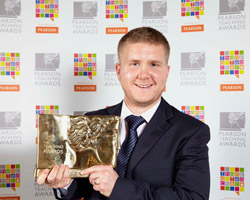 Sean Hardeley, who is studying for a Masters in Education at Loughborough University, has been named Outstanding New Teacher of the Year at the prestigious Pearson Teaching Awards.

Dubbed the Teaching Oscars, the awards champion exceptional teaching professionals across the UK. The presentation ceremony, hosted by TV presenter Clare Balding, will be broadcast on BBC2 this Sunday (27 October).

Sean Hardeley is described as an inspirational science teacher who goes to extraordinary lengths to help students understand difficult subjects.

Having started out as a health assessor for health insurance company BUPA, he switched his career focus to teaching. He studied for his PGCE at Loughborough and began working at Holy Cross RC High School, Chorley, three years ago, teaching all three sciences (physics, chemistry and biology) from the outset – something rarely attempted by a new science teacher.

Sean is now deputy head of the School’s science faculty and was nominated for the award by the head of science, Matt Power.

Matt said: “Sean brings innovation, excitement and drive to the science department, inspiring students to be more, want more and achieve more in his lessons. It has been a privilege to work with him.”

The award judges were particularly impressed by one of Sean’s innovative science projects. Through the school’s STEM Club, which promotes science, technology, engineering and maths, he initiated a project to send a weather balloon into space to record images of the earth and its weather systems.

The judges said: “The photos of the curvature of the earth were stunning. The project had a slim chance of working but, under Sean's leadership, the whole event ran beautifully. He just knows how to get everyone thinking and talking about science.”

Beyond the classroom, and in addition to his Masters studies, Sean is also involved in a range of lunchtime and after-school activities. For instance, he has taken on rugby league coaching, with his Year 7 side getting close to the national schools finals. He has also given time at weekends to train as an assessor for the Duke of Edinburgh Awards and to accompany students on expeditions.

Britain’s Classroom Heroes will be broadcast at 5.30pm on Sunday 27 October, with Mo Farah, Dame Doreen Lawrence, will.i.am, and Sir Terry Wogan among those presenting the awards.