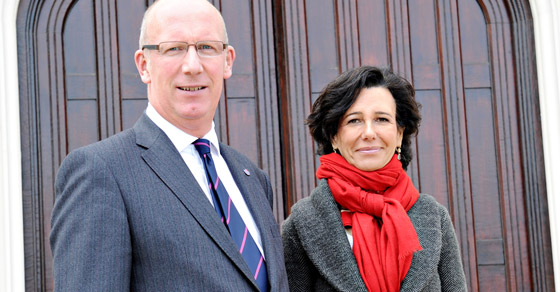 Chief Executive of Santander UK Ana Botin spoke on the UK economy at a special lecture at Loughborough University yesterday to celebrate the fifth anniversary of the agreement signed with Santander, through its Santander Universities Global Division.

Since the partnership began in 2008, over £1million of philanthropic funding has been drawn down to support a wide range of activities and initiatives for students and staff, including scholarships, research and enterprise awards, volunteer schemes, internships and internationalisation projects. To date, nearly 200 scholarships have been funded for students and staff from over 11 different countries.

During the celebrations, Ana Botin signed the renewal of the agreement with Loughborough, pledging support to the University over the next three years.

In her lecture ‘The Future of the UK Economy and the Role of Entrepreneurs’, which was attended by more than 100 guests, Ms Botin spoke about the importance of education, SMEs and banks in creating sustainable economic growth.

She also met with some of Loughborough’s entrepreneurial graduates - Ross Kemp, Becky White and the team behind Tom’s Fudge - who have benefitted from awards programmes supported by Santander Universities.

“I would like to thank Loughborough University for giving me the chance to speak to some of its students and staff today. The partnership between Santander and the University is going from strength to strength and I have no doubt that the renewal of the agreement will make a big difference to the professional and academic development of many students and researchers at Loughborough.”

“It was a great privilege to have Ana Botin on campus to join us in celebrating our five year anniversary with Santander Universities and to present an exclusive lecture in which Ms Botin shared her expertise on Entrepreneurism.

“Loughborough is very proud of the strong and dynamic relationship we have with Santander and we look forward to continuing to work together to enhance the Loughborough experience.”

On the same day Ms Botin met with regional businessmen at an event where the Bank discussed funding opportunities for SMEs. The Bank is currently engaged in a nationwide programme to boost lending to small and medium enterprises to speed up the recovery of the UK economy.

The partnership between the two organisations is managed by Loughborough University’s Development and Alumni Relations Office.