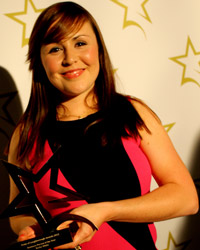 Loughborough University Graduate Becky White has been named Business Person of the Year in the annual Oak FM Pride of Loughborough Awards.

The Awards – held at the Radisson Blu East Midlands Airport Hotel on 22 November – celebrate the achievements of businesses and local community initiatives across 14 categories. Becky’s win recognises her entrepreneurial spirit and contribution to the business community in Loughborough.

The past 12 months have certainly seen Becky’s business onesixeight:fitness flourish. In August, she opened her first personal training studio on the University campus which has proved very popular, increasing her client base by 250%. Encouraged by this success, she now plans to branch out nationwide, starting in London in early 2014.

onesixeight:fitness provides personal training, beginner and intermediate running sessions and trampoline fitness classes. Since its launch in 2010 – whilst Becky was still studying for her Sport Management degree – the company has grown rapidly.

To keep pace with demand, Becky has taken on a team of four personal trainers and an office manager – and recently launched an internship scheme to help prepare young people for a career in the fitness industry.

Her business savvy and determination to inspire others have earned her a number of accolades and awards, including a previous Pride of Loughborough Award and inclusion in Leicester Mercury’s Rising Stars and Future Leaders – as well the University’s business ideas competition and Enterprise Awards.

She is also a Guinness World Record holder having organised the most people to bounce simultaneously on trampolines – a feat she undertook in 2012 to celebrate the Olympic Torch Relay’s journey across the University campus.

Becky – who features in the University’s Inspiring Graduates campaign – said of her success: “I’m thrilled to have received this Award. Setting up my business and helping people to enjoy exercise has been terrifically rewarding, but being recognised in this way is a real boost – and gives me the energy to work even harder.”