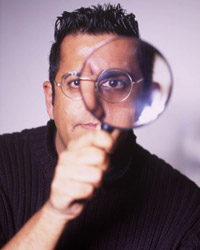 One of the country’s top science writers and award-winning broadcasters will be visiting Loughborough University in December to reveal what The Simpsons and complex mathematics have in common.

In this unique Christmas lecture, hosted by the University’s Department of Mathematical Sciences, Simon Singh will provide a fascinating insight into how this popular cartoon – the most successful sitcom in TV history – is littered with mathematical jokes and references.

The bestselling author, and Loughborough Honorary Graduate, has penned several books that discuss science and mathematics in an accessible manner.  In his latest book – The Simpsons and their mathematical secrets – Simon examines how writers of the show, many of whom are accomplished mathematicians, have used the cartoon as a way to explore complex numbers and theorems.

His lecture at Loughborough will discuss the many mathematical secrets he has discovered hidden in The Simpsons and its sister series Futurama.

Simon explains: “Hundreds of millions of people have watched The Simpsons, but very few viewers will have realised that they have been drip fed mathematics along the way.  For example, two episodes contain references to Fermat’s Last Theorem, the most notorious problem in the history of mathematics and a topic very close to my heart.  Euler’s equations, arguably the most elegant equation every discovered, appears in two other episodes.  Narcissistic numbers, Mersenne primes, calculus and much more appears in the various Springfield plots.

“Futurama, the sister series to The Simpsons, has just as much mathematics packed into each episode, because its writers are equally in love with numbers.  One of the writers, Dr Ken Keeler, even invented a brand new mathematical theorem in order to complete the plot of an episode titled ‘The Prisoner of Benda’.”

Don’t miss this opportunity to see one of the country’s greatest scientific minds in action.  The lecture takes place at 1pm on December 3 at the University’s Cope Auditorium.  Places must be booked in advance by emailing V.Novikov@lboro.ac.uk or by filling in the online booking form at www.lboro.ac.uk/departments/maths/news/booking/  Alternatively call 01509 222861.