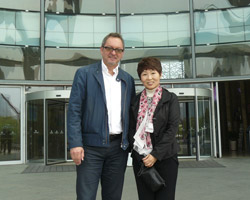 John Atkin from Loughborough University’s School of the Arts is leading a group of talented graduate artists in staging a major new exhibition of art in China.

The exhibition, entitled ‘Made in England’ will feature over 40 works of art including paintings, sculptures, drawings and film, reflecting a wide variety of approaches to contemporary fine art practice. It explores how the boundaries between design and fine art are becoming increasingly blurred.

The diversity of expression shown in the different art forms is a key aspect of the exhibition, demonstrating the variety of influences that have been central to John’s own personal artistic development.

John comments: “Made in England is going to be a great exhibition of works of art borne out of one distinct culture being displayed in an environment and culture which is completely different. I am delighted to be exhibiting in China again and particularly pleased to be able to provide an opportunity for the Loughborough graduates to showcase their talent."

John is a leading British artist who has exhibited worldwide. He is no stranger to working in China. He has made numerous successful working visits to the country since 2003 when he contributed to the cultural arm of the Beijing Olympiad. His sculpture ‘Strange Meeting’ remains in place at the Olympic Park today. In 2012 he was awarded Honorary Fellow of the Beijing Academy of Arts by Professor Wu Wei Shan. The pair became firm friends and Professor Wu Wei Shan subsequently invited John to become an international panel member for the Nanjing Youth Olympics, where another of his works ‘The Archer’ has been selected for the cultural arm of this event in 2014.

The ‘Made in England’ exhibition is being hosted at the Suzhou Jinji Lake Museum in the Jiangsu Province. It takes place between 19 December 2013 and 26 February 2014 and is being jointly hosted by the museum and Qu Art, a large art institution promoting art in the area.