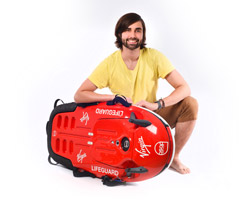 At the height of Australia's beach season, graduate entrepreneur Ross Kemp will unveil his one-person motorised life-saving craft to its world-famous lifeguard community, starting at Bondi Beach. His invention, Asap, combines the manoeuvrability of a small paddle board with on-board electric propulsion to help reach casualties faster.

Graduating with a first-class Product Design degree from Loughborough University just over two years ago, Ross is travelling up and down the Gold Coast and Sunshine Coast for the next three weeks, to gain lifeguards’ feedback, in time for Asap’s global product launch in Summer 2014. This once-in-a-lifetime opportunity came about after Asap caught the attention of Virgin boss Richard Branson, when Ross won investment on the BBC tv show, Be Your Own Boss.

Branson offered to fly Ross to Australia, saying: “I have a deep passion for protecting the ocean but I am also familiar with the dangers it holds. I have had my share of close shaves, and have been rescued from sinking boats and balloons many times, and even had to swim for shore once, clinging to a plank of wood. I think the Asap watercraft is a fantastic invention and will be a wonderful success in Australia. Anything that can help lifeguards reach drowning casualties faster must be a good thing.”

Ross developed his idea whilst lifesaving training at Loughborough and refined Asap in the University’s Graduate Commercialisation Studio, winning a string of national awards including Lloyds TSB Start Up of the Year and a Santander Universities Award. He also attracted interest from the lifeguard industry including the RNLI and Lifesaving South Africa, following the country’s worst ever drowning tragedy in which six rugby players were swept out to sea in Port Elizabeth in March 2012.

Ross said: “It’s taken months of long days, even longer nights and strong coffees – but we’ve designed a fantastic rescue product, which I am certain will help rescuers reach people in the water quicker.  Australia is one of the best places in the world to test our product, with some of the world’s greatest lifeguards.  I can’t wait to get in the Aussie waters!”

Professor Steve Rothberg, Loughborough’s Pro Vice Chancellor of Enterprise, said: “Ross is an outstanding ambassador for graduate enterprise. We’re delighted to have been able to support his business in its early stages through The Studio and he fully deserves the tremendous success that he has achieved. I wish him a very successful trip to Australia.”