From Loughborough to Westminster, and back again 2 December 2013 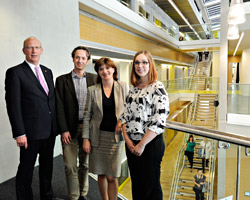 A Loughborough University Research Associate has been invited by The Royal Society to talk about her experiences on the Pairing Scheme in 2012, when she was partnered with Nicky Morgan, MP for Loughborough.

During her week in Westminster Dr Elaine Yolande Gosling, who works with the University’s School of Civil and Building Engineering and the Design School, learnt from the workshops organised by The Royal Society about Science in Government and Parliament.

She attended Scientific Select Committee meetings and gained insights into how these are used by MPs to help inform the policy decision making process. She also heard from Sir John Beddington, Government Chief Scientific Advisor (2008 – 2013) who spoke about how science and engineering underpins the UK’s response to national and global issues.

Dr Gosling shadowed Nicky Morgan at work, observing the running of her office, attended Prime Minister’s Questions and was invited to No. 10 for the Eid Celebrations.  She later met the Prime Minister, David Cameron, on his visit to Loughborough.

The Pairing Scheme also encourages MPs and Civil Servants to visit the place of work of the paired scientist.  Nicky Morgan visited the University to learn from Dr Gosling about the projects she has worked on. These included ‘Working Late’ which looks to promote healthy ageing at work through better, more thoughtful design and ergonomics (www.workinglate-owl.org) and the Reinvent the Toilet project, which won a prestigious award from the Bill and Melinda Gates Foundation.

Over the past year Dr Gosling has continued her collaboration with Nicky Morgan, Professor Robert Allison, Vice Chancellor and President of Loughborough University and Professor Neil Mansfield, Associate Dean of Research in the Design School, to develop ways of engaging with policy and decision makers.

Dr Gosling said: “The Pairing Scheme has given me the opportunity to pursue engagement with policy and decision makers and to learn how best to communicate research findings to meet their needs. It has been a fantastic experience and one that is still on-going.”

The next phase is to develop research output engagement tailored to the needs of policy and decision makers in Government. This is an on-going process being partnered by Dr Gosling, Nicky Morgan and Professor Allison.

Professor Allison said: “The scheme has provided opportunities for increasing engagement with policy makers, though targeted responses to issues raised in Parliament and Government based in the areas of research excellence at the University.”

The Royal Society’s MP-Scientist pairing scheme aims to build bridges between parliamentarians and some of the best scientists in the UK. It is an opportunity for MPs to become better informed about science issues and for scientists to understand how they can influence science policy. Over 200 pairs of scientists and MPs have taken part in the scheme since it was launched in 2001.

Sir Paul Nurse, President of the Royal Society said: “We live in a world facing increasing challenges that can only be addressed with a clear understanding of science.  From climate change to influenza outbreaks, GM food to nuclear power, our MPs have to make decisions about complex issues that will affect the lives of all those in the UK and, in many cases, more widely throughout the world.  This means that MPs and scientists have a responsibility to engage with each other to get the best possible scientific advice into public policy making.

“We set up the Royal Society’s MP Scientist pairing scheme in 2001 to provide the opportunity for MPs and scientists to build long-term relationships with each other and have now organised over two hundred pairings.

“I know many parliamentarians and scientists who have gained from the scheme, and the shaping of public policy can only improve over time as these relationships continue to grow.”