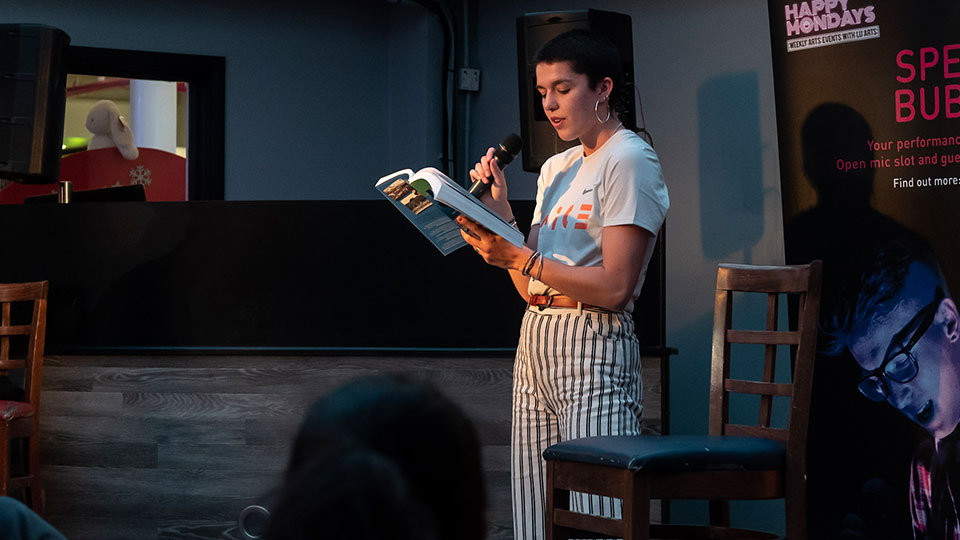 Join us for an evening of performance poetry showcasing the spoken word talent at Loughborough University.

Speech Bubble is an opportunity for Loughborough University students and staff to perform their own work in front of an audience. It’s also a chance for everyone to enjoy the considerable talent the University population has to offer. Every year the event impresses with the range and depth of spoken word talent – from across all subject areas and interests.

As this is an online event, open mic slots must be booked in advance. Any Loughborough University student who would like to perform should contact LU Arts by emailing LUarts@lboro.ac.uk no later than Monday 15 March. Slots are subject to availability and are open to students at the East Midlands and London campuses.

In addition to the open mic performers, we will be joined by two professional poets:

Marcel Lucont is without question the greatest UK-based French comedian around. His deadpan stand-up, world-class sex poetry and bawdy chansons have been a huge hit all over Europe, Australasia and America and he has improved many a TV show along the way, including:

Maria Ferguson is a writer and performer from Essex. She has been a resident artist for the Roundhouse and Battersea Arts Centre and commissioned by the Royal Academy of Art, Stylist magazine and BBC Radio. Her debut one-woman show Fat Girls Don't Dance won the Saboteur Award for Best Spoken Word Show, and her follow up Essex Girl won Show of the Week at VAULT Festival. Both are published by Oberon. Her poetry has been anthologised by Bad Betty Press and Highly Commended by The Forward Prizes. Her debut collection Alright, Girl? was published by Burning Eye in 2020 and subsequently developed into an audio experience for The Living Record Festival, where it was met with critical acclaim.

Your host for the evening will be Speech Bubble Co-Ordinator Megan Constable. Megan is a doctoral researcher at Loughborough conducting a practice-led PhD in creative writing as Other. Her interest in spoken word began when she attended a performance poetry night hosted by poetry collective Bang Said the Gun.

Although this is a free event which is open to students, staff and members of the public, booking is essential. The event will take place via Zoom and the login details will be emailed to everyone who books a place.

This event is part of Happy Mondays – your weekly creative fix in partnership with LSU.