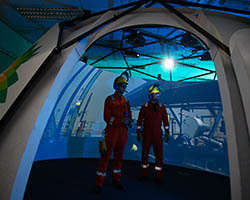 A Loughborough University computer science expert has collaborated with BP on an immersive training experience that enables safety-critical tasks to be rehearsed in a simulated environment.

Believed to be a first for the chemical industry in the UK, the Igloo – as it is known – is an alternative approach to training. It allows trainee field technicians to practise safety critical tasks, such as safe startup and emergency shutdown procedures, in a virtual production plant brought to life by integrating it with a fully dynamic process simulator and the control room simulator.

A 360-degree projection screen enables trainees to learn as they go and allows mistakes to be made without disastrous consequences. Realistic sound effects mimic real life operation of the plant, and the dynamic process simulator produces the responses expected from the real plant in different safety critical operation scenarios.

Paul Chung, Professor of Computer Science at Loughborough University, and Dr Pablo Fernández de Dios, a Research Associate on the project, were responsible for implementing the communication bridge between the Igloo and the dynamic process simulator, resulting in a realistic plant environment which allows field and control room technicians to interact together. This is a new concept and, for the first time, the competence of entire shift teams can be assessed.

Following an evaluation study which involved more than 50 BP and contract technicians and staff, the next stage will be to seek funding to develop the concept further.

The project has been shortlisted for two awards in the IChemE Global Awards 2015 in the categories of Process Safety and Education and Training. The winners will be announced on 5 November.

Professor Chung said: “The Igloo presents a fantastic opportunity to bring about a step-change for the chemical engineering industry; it is perfect for training and allows technicians to try out operations which they don’t do that often, such as an emergency shutdown. A tool like this could also be used to certify that a technician has been trained properly.

“Accidents are costly and can affect companies’ reputation, but the quality of the training offered by the Igloo virtual environment could prove cost-effective as it’s possible for technicians to be trained without interrupting plant production. The Igloo has the potential to play a big part in accident prevention; increasing safety, reliability and capability in the long run.”

“But the novel 3D technology, developed by BP European Acetyls Hull site and partners in the Igloo project, has given us the opportunity to enhance our training and competence assessment capabilities in Hull by providing a fully immersive experience for both field and maintenance technicians.

“Being shortlisted at such a prestigious event gives us the ideal platform to further raise the profile of this state-of-the-art technology.”