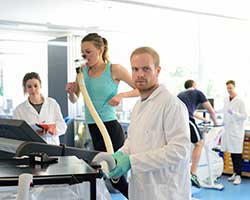 Loughborough University has been ranked as one of the Outstanding Global Universities for Sport Science in a new report published by the University of Tsukuba in Japan.

‘World University Comparisons in Sport Sciences, Physical Education and Kinesiology 2015’ aims to evaluate, for the first time, the quality and impact of teaching, research and competitive sports provided in these subject areas by universities around the world.

The report confirms Loughborough’s standing as a world-leader in research, education and the management of sport, exercise and health sciences, which is delivered across the University – in the School of Sport, Exercise and Health Sciences, the Wolfson School, the School of Business and Economics and the Sports Development Centre.

Thomson Reuters, the independent data compiler for the report, collated an initial longlist of universities around the world that scored highly in one or more of the metrics considered to be indicators of ‘world-class’ performance across research, teaching and competitive sport.

From this they compiled a shortlist of the best performing universities, with Loughborough named as one of just three overall Outstanding Global Universities in the report.

Further information about the methodology used to compile the report is available online.