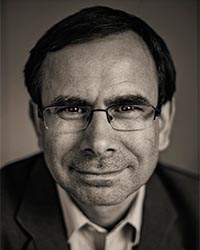 Donald Hirsch, Director of the Centre for Research in Social Policy (CRSP) at Loughborough, has been promoted to Professor of Social Policy.

A leading authority on poverty and the welfare system, Donald has recently been at the centre of debates and analysis on tax credits, benefits and the Living Wage. The demonstrable impact that CRSP is having on policy and practice in this field was recognised in REF2014, with the centre submitting one of two narratives awarded a 90% 4* impact score, the highest in the University.

The Centre’s work is based around the Minimum Income Standard, an ongoing body of research funded by the Joseph Rowntree Foundation that uses detailed deliberation among members of the public to establish what incomes households need for a minimum acceptable living standard. Among the many applications of this work developed by the CRSP team, the most prominent has been the setting of the UK Living Wage. This is a voluntary wage rate paid by 2,000 employers, which has helped stimulate the Government’s adoption of a compulsory (although lower) living wage for over-25s.  Starting in April 2016, this will bring substantial pay increases for millions of low-paid workers.

The Centre’s work also played a key role in this week’s dramatic turnaround on tax credits. It was the first to point out that the Summer Budget’s cuts would cause losses of above £1,000 a year for a typical low-income working family, and its more detailed analysis, alongside those of several think tanks, showed that the cuts would severely dent family living standards.

Professor Hirsch said: “It is clear that the political revolt against tax credit cuts and their eventual abandonment followed from the alignment of powerful evidence, all pointing in the same direction.

“We cannot say that our findings were the ones that caused the U-turn, but that the reports published by ourselves and others were crucial in this process. It is both rare and gratifying to see evidence making a difference to the political process in this way.

“We also have a particular role in the analysis of living standards because, unlike the think tanks operating in this field, we bring in-depth analysis and the strengths of a leading University into the picture.

“Our strong team at CRSP have developed an approach to research on minimum living standards that is being emulated by researchers across the world. Loughborough University brings an authority and independence to the calculation of the Living Wage that could not be achieved by pressure groups and think tanks.”