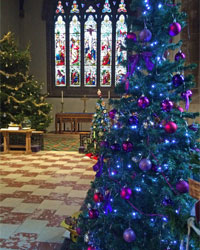 Loughborough University has got into the festive spirit for the annual Loughborough Christmas tree festival, organised by the town’s All Saints Parish Church.

The University tree, which is decorated in the pink and purple corporate colours, is one of many dazzling trees being presented at the Parish Church this year.

Members of the public are invited to attend the festival which is running over a four day period from 18 November to 22 November.

As well as enjoying the display of Christmas trees, there will also be a concert on Friday 20 November, with performances from Singing for Fun Choir and the Loughborough Male Voice Choir, at 7:30pm.

Tickets for the festival and concerts can be obtained from the Parish Office on 01509 217029 or on the door.