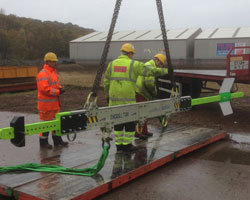 Aero-Beam, a breakthrough in crane operation technology, has won the Most Innovative Product Award at the LEEA LiftEx 2015 exhibition and conference.

The aerodynamic lifting aid reduces drag and improves stability of loads so that work on construction sites – particularly of tall buildings – can continue in adverse weather conditions.

Winding off is a major issue limiting crane operations. Lighter loads with a large sail area – for example, facade panelling – cause particular problems with high winds causing loads to behave unpredictably – limiting safe lifting, handling of the load and operation of the crane itself.

The start of the millennia has seen unprecedented demand for iconic tall buildings. Wind speed increases at altitude, exacerbating the problems faced by crane operators and increasing the time lost due to weather.

Suitable for high sail area loads – such as concrete shuttering, panels and glazing units – it is passively-stable, keeps the load pointing into the wind, and its innovative design minimises the time taken to rig and de-rig.

The Wing allows the lifting of building materials by a tower crane in higher speed and less stable wind conditions, reducing delays in a construction programme.

IP Officer Colm Watling says of the Award: “We are delighted by the reception of Aero-Beam at the LiftEx exhibition and conference. The Award highlights the potential of the developing technology, and we hope that it will encourage potential partners to get involved in its global roll-out.”

In September 2015 the University opened an additional academic campus in London’s new innovation quarter. Loughborough University London, based on the Queen Elizabeth Olympic Park, offers postgraduate and executive-level education, as well as research and enterprise.

LEEA is the globally recognised trade association for all involved in the design, manufacture, hire, repair, maintenance and use of lifting equipment.

Speedy is a UK tools, equipment and plant hire company, operating across the construction, infrastructure and industrial markets.