Come and enjoy some festive fun at Christmas Jumper Day 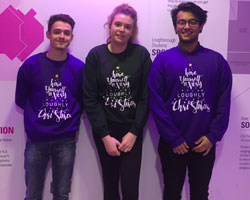 There’s not long left to dig out your festive jumpers ready for Christmas Jumper Day at Loughborough University next week.

The event returns to campus on Tuesday 1 December, following last year’s success and will raise money for Save the Children as part of their Christmas fundraiser.

Come along to see some fantastic festive performances from Loughborough Students’ Union’s Stage Soc, Tuxedo Swing and Fever, whilst enjoying some tasty treats including burgers, pies and fresh doughnuts.

The official Loughborough Christmas jumper, designed by student Lucie Baker-Wyse, is also available to purchase on the day of the event.

Steph said: “We’re so excited to see the return of Christmas Jumper Day and hope to raise even more money for Save The Children this year. There will be lots of festive fun and entertainment for people to enjoy, everyone is welcome to come along, we even have the Mayor and Mayoress of Charnwood attending!

“All we’re asking is for everyone to donate £2 which will go to Save The Children and then enjoy the festivities, it’s that straightforward.

“Having the title of Guinness World Record holders is an incredible feeling, we’re hoping we can hold onto it again this year so make sure you sport your best Christmas jumper.

“So if you’ve got some time spare at lunchtime on 1 December, come along and lets spread some festive spirit, we’d love to see you on campus. Don’t forget to tell your family and friends!”

The event will take place on Tuesday 1 December from 12.30pm at Shirley Pearce Square, in front of Martin Hall on Loughborough University Campus.

A similar event will also take place on the Loughborough in London Campus, at the Open Space Area, on Tuesday 1 December from 12.30pm.

If you have any queries, please contact Steph Noble 222923 or s.noble@lboro.ac.uk.