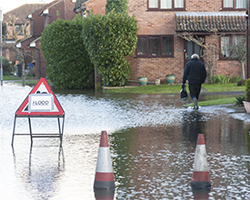 Healthcare emergency planning in the UK must be tougher if it is to withstand extreme situations such as floods and heavy snowfall, new research from Loughborough University reveals.

Researchers from the University’s School of Civil and Building Engineering explored the challenges and opportunities UK healthcare emergency planners and responders have been faced with in emergency situations.

The research team initially sought to identify the history of emergency planning in the UK with a specific focus on healthcare. They then organised an international workshop with professionals across a range of disciplines and sectors and conducted in-depth interviews with experts in social science, healthcare management, utility supply and emergency planning and co-ordination.

The research revealed the following key issues associated with emergency planning in the UK:

The research findings concluded that improvements were needed in both the long and short term, and that the following action points needed to be addressed by the emergency planning process:

Dr Nebil Achour, who co-ordinated the research for Loughborough University, said: “While the UK has made significant progress towards developing a comprehensive resilience strategy, including plans on how to respond to major emergencies, extreme weather events such as the winter floods of 2013/14, have demonstrated that this process needs more refinement in order to become resilient.

“Our research has demonstrated that there are many opportunities that could provide extra support to the planning and response process, if only they were integrated into the system we currently have.

“Although our research focused on healthcare, we believe that its findings could be advantageous for other businesses such as higher education settings, where major change is also taking place, in order to develop more efficient and effective processes that suit the needs of students and other stakeholders.”

The full study has been published in the International Journal of Emergency Management.