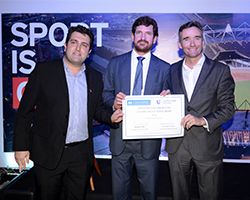 It has been awarded five stars in the independent QS Stars university rating scheme, putting it among the best universities in the world, and is consistently ranked in the top twenty of UK universities in the Times Higher Education’s ‘table of tables’. It was named Sports University of the Year 2013-14 by The Times and Sunday Times and is ranked 2nd out of 113 UK universities for student experience by the Times Higher Education. In recognition of its contribution to the sector, Loughborough has been awarded seven Queen's Anniversary Prizes.

In autumn 2015 Loughborough University will open an additional academic campus on the Queen Elizabeth Olympic Park, the centre of the London 2012 Olympic and Paralympic Games. Loughborough University London will offer postgraduate education, as well as research opportunities, with a particular focus on innovation and entrepreneurship to meet the challenges of a global digital age.

Chevening Scholarships are the UK government’s global scholarship programme, funded by the Foreign and Commonwealth Office (FCO) and partner organisations. They provide unique opportunities for leaders of the future to build a global network of continuing professional significance and also to establish social, cultural, academic or commercial partnerships with the UK.

In Brazil, Chevening is recognised as one of the best fully funded Masters scholarships of its kind. In 2014, 27 students from Brazil were awarded scholarships and this year it is hoped that this number will at least double. Partnerships like the Loughborough Olympic Legacy Scholarship make a huge difference to the programme’s impact and outreach.

Currently there are over 1400 Chevening alumni in Brazil working in the public and private sector, local and national government and international NGOs as well as education. This network of alumni plays an important role in helping the UK achieve its objectives and have a better understanding of Brazil. In the build up to Rio2016, this special scholarship will help promote the UK as a centre of excellence in sport and create a foundation on which Britain and Brazil’s sporting partnership can flourish.

Chevening Scholars come from 160 countries worldwide (excluding the USA and the EU), and this year the Scholarships will support over 1500 individuals. There are over 43,000 Chevening alumni around the world who together comprise an influential and highly regarded global network.

Applications for Chevening Scholarships must be submitted online at www.chevening.org. Further details of closing dates and priority subject areas (which vary from country to country) are available on the country pages of the Chevening website.