We did it! Loughborough University sets a Guinness World Record 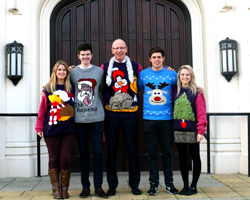 Staff, students and members of the public who wore their best Christmas jumpers as part of a festive fundraiser have officially set a Guinness World Record.

A total of 1,175 people gathered on campus at the newly landscaped Shirley Pearce Square, in front of Martin Hall, on 10 December not only to help set a world record, but also as part of the national Save the Children Christmas Jumper Day fundraiser, which aimed to “make the world better with a sweater”.

Sarah said: “We are absolutely thrilled with the news that Loughborough University has beaten the previous Guinness World Record of 639 people, especially after waiting for three nerve-wracking months to find out whether we had been successful or not.

“Thank you to everyone who supported the event. We couldn’t have done it without you.”

Professor Robert Allison, Vice Chancellor of Loughborough University, said: “Today’s announcement is cause for celebration for staff, students and the public who donned colourful festive jumpers as part of a fun community gathering while raising money for charity. To hear that the University is now a Guinness World Record holder has certainly put a smile on the face of all who took part.”