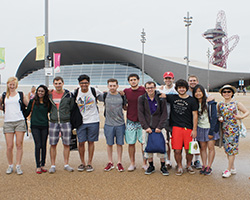 Students from the EU and overseas are invited to attend Loughborough University’s International Summer School for two weeks of fun and intensive learning.

Open to both undergraduate and postgraduate students, the Summer School often attracts those with an interest in sport and management and enterprise. It will also be of interest to students looking to pursue a career in international sports management or in a sport-related social enterprise. The deadline for applications is Friday 1 May.

For the first time, the School of Business and Economics is extending the invite to Loughborough students who are keen to meet new friends from all over the world.

Running from Saturday 11 July to Saturday 25 July, the event programme will include visits to sporting organisations and a weekend visit to London and the Queen Elizabeth Olympic Park – home to Loughborough University in London.

A number of competitive scholarships are available to support students’ attendance.

Maxine Clarke, Programme Director for the Summer School, said: “We held our first-ever International Summer School last year which was very successful and we’re delighted to run it again this year by welcoming a new crop of students to join us for what promises to be a fun-filled fortnight.”

Sandy Ritter, International Development Manager at Loughborough University, said: “If you’re after a taste of UK campus life, the Summer School is a golden opportunity to learn more about different cultures and to mix with other students from around the world. You will also receive top teaching from the UK’s premier destination for sports and related academic disciplines.”