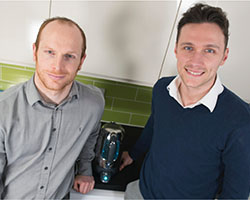 Two Loughborough University engineering graduates have designed and built a ‘smart’ kettle which uses the latest technology to create the perfect beverage.

Robert Hill, 29, and Richard Hill, 31, have already been granted a UK patent for the Appkettle – claimed to be the world’s first real-time volume, temperature and time sensing kettle – and are awaiting a patent to be granted for the major kettle regions worldwide.

The current prototype is controlled via wi-fi using a free smartphone app which allows multiple users to connect to the kettle anywhere in the home or office, saving time and energy consumption in the process. Its features include variable temperature control and ‘smart scheduling’ which uses real-time temperature and water volume information from the kettle to heat and cool drinks at a time convenient for the user. There’s even a baby bottle preparation function which allows the user to schedule the kettle to boil and cool down in advance of a baby’s feed.

The entrepreneurs, who graduated from the University’s School of Civil and Building Engineering in 2006, had their ‘light bulb’ moment when they were sat with family and friends discussing how they all fancied creating a ‘perfect cuppa’ from a kettle that could be seen and controlled via their smartphones.

Robert said: “This idea then evolved into our vision for Appkettle, which was to embed technology into a kettle to improve its use, how we interact with it and to remove any unknowns associated with controlling it remotely. From that moment, we knew it was the right time to begin our business partnership and journey together.

“A truly ‘smart home’ app-controlled product should offer a natural extension of use and convenience to the user, more functional benefits, and allow all users a visual connection to it. In summary, we have embedded technology in Appkettle to improve its convenience for the everyday user, ensuring it benefits and connects with more users throughout the world. Looking ahead, we have plans to develop further exciting new products such as tea and coffee makers that are simple to use and which connect with other products in the smart home.”

The friends, who are inspired by the late American inventor Steve Jobs and English designer Sir Jonathan Ive, said their degree and wider Loughborough University experience had played a pivotal part in their success to date.

Robert added that an “unquestionable belief in yourself and the product” is crucial if you are to establish a career as a technological entrepreneur.

Speaking about their success, Professor Tony Thorpe, Dean of the School of Civil and Building Engineering, said: “It is inspiring to hear that two of our graduates are on the road to success with their Appkettle invention. We look forward to watching their careers develop; they should be very proud of their achievements to date and it’s great to know that they began this journey here at Loughborough.”