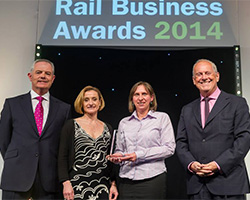 A Loughborough University civil engineering graduate has been presented with a top award in recognition of her dedication to and passion for the rail industry.

Pippa Higgins, Senior Design Manager at Taylor Woodrow, was judged to be the most outstanding woman working within the UK rail industry and walked away with the Women in Rail Individual Award 2014 from the Rail Business Awards.

The citation on the award read: ‘Pippa Higgins has demonstrated passion for working within the industry through her dedicated project work and through external organisations, as well as creating an engineering badge for Girl Guiding. Pippa has established a best practice charter for her design team and Network Rail and promoted the first Women in Taylor Woodrow event’.

Pippa, who graduated from the University in 1998 with a First Class degree in Civil Engineering, said: “I was really surprised to win this award, but it is great to be recognised for the work I do. I had a fantastic time at Loughborough and at The Holt halls of residence. The civil engineering course gave me a great base knowledge across all aspects of design and construction. As the course is recognised by businesses, I was able to get sponsorship from Taylor Woodrow which helped me gain experience in the industry while I was studying, as well as opening up job opportunities when I graduated.”

Professor Tony Thorpe, Dean of the School of Civil and Building Engineering, said: “This is wonderful recognition not only of the engineering work that Pippa has undertaken in the rail industry, but also of her significant contribution to promoting women in engineering and the rail industry in particular. We are delighted that one of our graduates has achieved such great success.”