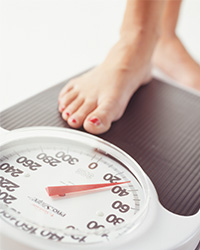 Researchers at Loughborough University will join forces with a group of academics specialising in fitness genetics to explore whether weight gain is accelerated by the obesity gene FTO.

DNA is thought to be a major factor in determining whether a person will become overweight, and the FTO gene was the first to be identified as having a powerful influence on weight. With this in mind, Dr David Stensel, Reader in Exercise Metabolism and Associate Dean for Enterprise in the School of Sport, Exercise and Health Sciences at Loughborough University, will work with the science team at Oxford-based MuscleGenes on a study into the interaction between genetics and lifestyle factors to better understand how genes may be linked to bodyweight.

Previous studies on the ‘high risk’ version of the FTO gene showed that fatty foods were more tempting to carriers of the gene, who also had altered levels of ghrelin, the hunger hormone. This means that some people are biologically programmed to eat more and may prefer higher calorie foods.

The team at MuscleGenes comprises of two PhD geneticists, a medical doctor and a certified nutritionist who are developing an evidence-based system that helps its customers use their DNA profile to determine which training and nutritional plans are likely to help build up muscle or burn fat.

Dr Stensel said: “Understanding how FTO affects the odds of people becoming overweight is an important area of research that could make a difference to people’s lives. Obesity is one of the biggest health challenges of the 21st Century, with approximately two-thirds of UK adults now being classed as overweight or obese. This puts them at increased risk of high blood pressure, type 2 diabetes and heart disease.

“It is hoped this study will provide some clarity on how physical activity levels will interact with the FTO gene. It is possible that being physically active will counteract the increased appetites of those with the ‘high risk’ version of the FTO gene. Alternatively, the opposite might be true. We are hoping our research collaboration with MuscleGenes will shed some light on this.”

“It is our belief that part of the problem with the genetic testing industry has been the lack of actionable information provided to customers. We will start to more fully realise the benefits a personalised fitness training and nutrition plan can bring us all by working with academic groups to help further the research, by constantly challenging the assumptions on which our recommendations are based, and also, importantly, by overlaying relevant environmental information such as eating behaviour, weight and activity levels.”

MuscleGenes was founded in July 2013 by Dan Reardon, Samantha Decombel, Stuart Grice, and Mark Gilbert. An initial conversation between Dan and Stuart at their best friend’s wedding led to the research and development project that is now MuscleGenes. With £500,000 of investment raised to date, MuscleGenes is staying true to its academic roots, and leading the world of fitness genetics.

It uses the combination of people’s DNA and their environmental circumstances to provide them with proactive lifestyle recommendations to help them achieve their fitness goals, rather than simply identifying risks to their health. MuscleGenes’ tests and service are there to empower people, not to scare them.

MuscleGenes has developed a strong ethical code of practice to ensure its product is in keeping with its own beliefs. It does not believe genetic testing can be used for athlete selection, and therefore does not test under-18s. It believes everyone should own their genetic data, and therefore have an opt-out clause for all customers wishing not to participate in future research. MuscleGenes believes this information should be shared freely with academic communities for the advancement of science and human health, so it shares its data with carefully vetted academic partners.

MuscleGenes continues to go from strength to strength and recently expanded its operations to west coast USA, setting up a branch in Beverley Hills, California.