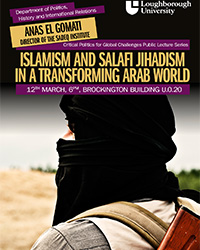 The founder of a non-partisan and independent think tank will visit Loughborough University today (Thursday 12 March) to discuss Islamism and Salafi Jihadism in a transforming Arab world.

Anas El Gomati, Director of the Sadeq Institute in Tripoli and a Loughborough politics graduate, will lead a free public lecture at 6pm in the Brockington Building, room U.0.20. No booking is required.

Anas, a frequent commentator on Libyan and Middle Eastern affairs for news networks Al Jazeera and Sky News among others, has spent the last four years travelling across North Africa and much of Mashreq researching the emerging political and social roles of groups such as the Muslim Brotherhood. He recently published a study titled Libya’s Islamists and the February 17th Revolution which explores the shifts, challenges and threats to the theological understanding of Salafi, Islamist and Salafi-Jihadist groups in Libya.

Dr David Berry, Head of the Department of Politics, History and International Relations at Loughborough University, said: “We are pleased to welcome Anas back to the University to learn more about his publications and international experience in public policy and political analysis. The event is part of a series of lectures being hosted by the Department around the theme of ‘Critical Politics for Global Challenges’.”