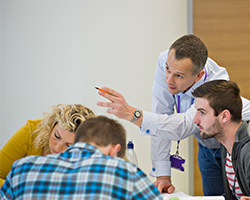 Loughborough University is inviting employers of any size to help nurture future talent by investing in the Government’s new Degree Apprenticeship scheme.

The Digital and Technology Solutions Degree Apprenticeship, offered by the University, is a qualification launched by the Department for Business, Innovation and Skills through the Tech Partnership – an expanding network of employers dedicated to creating the skills needed to grow the digital economy.

On Wednesday 22 April, from 10.30am to 2pm, the University will hold an Employer Information Event which will introduce the Degree Apprenticeship and provide essential details on what employers need to know. The free event will be held in the University’s Haslegrave Building, Room N112. Lunch will be provided.

The Degree Apprenticeship consists of a 2:1 ratio of IT and business skills. Graduates will gain a wealth of new knowledge, along with the ability to:

The scheme is designed to allow young people to complete a full honours degree alongside their employment while paying no tuition fees, and earning a wage throughout. The Government meets two thirds of the tuition fees, and the employer pays the remaining £9,000 over four years, plus the apprentice salary. The apprentice will spend 80 per cent of their time at the company, and will study at the University on day release.

Professor Morag Bell, Pro-Vice Chancellor (Teaching) at Loughborough University, said: “Becoming one of our employer partners is a positive move which can benefit both the employer and prospective apprentices. The University will deliver the best combination of vocational training and a full honours degree, which not only equips companies with high calibre applicants, but also offers excellent career prospects for the apprentices themselves.

“The aim is to help shape the careers of the leaders of tomorrow, by equipping apprentices with degree level knowledge and on-the-job practical training which employers need both now and in the future.”

For a full event programme and to register in advance, click here.

If you are unable to attend, but would like to discuss the Degree Apprenticeship opportunity, email kt@lboro.ac.uk.