Is your child a fussy eater? Loughborough University wants to hear from you 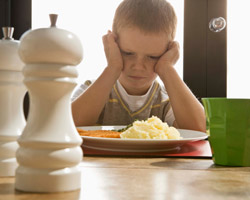 Loughborough University is on the lookout for parents and carers to share information on their children’s vegetable eating habits.

University researcher Clare Holley would like to invite parents and carers of children aged two to four to fill out a short online questionnaire by the deadline of the end of April, which asks how they go about feeding vegetables to their children.

The information will help inform a study that is investigating the barriers which stop pre-school children from eating vegetables. In early to middle childhood, it is very common for children to refuse certain foods. This phase, known as neophobia (fear of the new), serves an evolutionary purpose to stop newly mobile children from eating foods which may do them harm, but we know that vegetables in particular are commonly refused foods. As eating habits established in early childhood can follow us into adulthood, it is important to help children to eat varied, healthy diets early on in life.

The questionnaire should take no longer than 15 minutes to complete. Helpful guidance on what constitutes a portion of vegetables is provided within the questionnaire.

Clare said: “It can sometimes prove a tough challenge for parents and carers to encourage children to eat their vegetables. It is thought that humans may be genetically programmed to be wary of vegetables in particular due to their typically bitter tastes which are historically associated with poisonous fruits.

“Any new information we can collect on this area of study is very valuable as it will help to paint a broader picture of children’s eating habits.”

Clare is part of the Loughborough University Centre for Research into Eating Disorders (LUCRED) within the School of Sport, Exercise and Health Sciences (SSEHS).