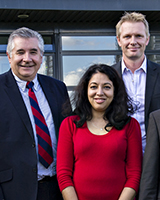 Loughborough University has signed a contract to provide BMW Group with a pioneering three-year research study exploring how humans interface with their cars.

The partnership will bring together skills from within the University’s School of Business and Economics to create a new interdisciplinary laboratory on campus with plans to bring in researchers from other schools, including Materials Engineering, Design and Chemistry.

Loughborough University has a long-established history across a number of faculties of working in innovative human-machine interfaces, driver ergonomics and autonomous vehicles in collaboration with companies including Jaguar Land Rover, Rolls Royce and Ford.

This new research team will be led by Dr Mashhuda Glencross, who is a member of the University’s Centre for Information Management (CIM). She has over a decade of research experience gained through working on a range of virtual reality systems, haptic interfaces, computer graphics, and graphics processor technologies gained at the University of Manchester and ARM prior to her joining Loughborough University.

Dr Glencross will be working with Professor Tom Jackson, Director of CIM, and Professor Jim Saker, Director of the Centre for Automotive Management, on this research, which is sponsored for three years.

Explaining the aims of the research, Dr Glencross said: “Cars are changing. In the future, we will see cars that are completely driverless or autonomous, some that have drivers who are in complete control and others that are somewhere in between. For each of these scenarios we want to see what the car should look and feel like, and this fits well with the innovative work we have already done in the area of embedded intelligence and the understanding of information.”

The research will see an interdisciplinary approach encompassing the areas of computing technology, ergonomics and materials science building on advances in smart and digital materials.

“This is innovative, blue skies research,” added Professor Saker.“We’ll be pushing the boundaries in thinking around customers’ desires and reactions. It’s a real win for the School of Business and Economics, and we’re extremely excited about testing out new ideas and seeing what can be done.”

The research study will run until September 2017.