Volunteers needed: Can you get stronger by lifting light weights? 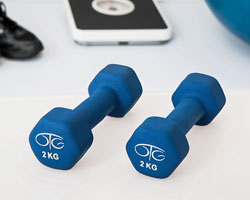 Researchers from the School of Sport, Exercise and Health Sciences are looking for volunteers to help with a new study.

The study will involve a 6 week training programme consisting of three sessions a week, each lasting no more than 20 minutes. Before and after the training, muscle strength and size will be assessed and muscle biopsies taken from the thigh. Overall, a commitment of 8 weeks is required from participants.

All testing and training will take place at the National Centre for Sports and Exercise Medicine and the Clyde Williams Building on Loughborough University campus.

Sessions are organised around the participant’s availability.  Volunteers will receive an extensive screening of lower limb strength and size, a fully supervised lower limb training programme and get to take part in the development of exciting strength training techniques. Travel and inconvenience costs will also be covered.

Anyone interested in taking part or finding out more should email Dr Richard Ferguson on R.Ferguson@lboro.ac.uk or call 01509 226333.