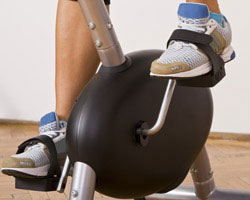 The Leicester-Loughborough Diet, Lifestyle and Physical Activity Biomedical Research Unit are looking for volunteers to help with a new study.

The study will investigate whether short bursts of exercise can help prevent diabetes.

It will see if six weeks of exercise ‘HIT’ training can reduce the amount of fat in the liver and improve responses to insulin, to reduce the risk of diabetes.

During the first control phase of the study, participants are simply asked to maintain their normal dietary and lifestyle habits. The second phase will involve exercise training, where participants will complete three sessions per week on a static bike.

Sessions are organised around the participant’s availability and can take place at training locations which include Loughborough University, the Leicester Diabetes Centre or the Queens Medical Centre in Nottingham.

Participants receive an extensive medical health check, a fully supervised one-on-one exercise training programme and get to take part in leading NHS-funded health research. Travel expenses will be covered and participants will receive an inconvenience allowance.

Anyone interested in taking part or finding out more should email James King on J.A.King@lboro.ac.uk or call Alison Stanley on 01509 226445