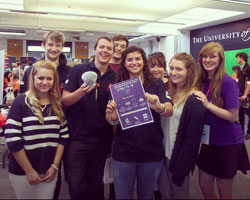 Loughborough Students’ Union Rag has once more raised over £1m to help support local and national charities. It is the sixth year running that Rag has broken the £1m barrier.

This year, Loughborough students managed to raise an impressive £1,393,847.08 through a wide range of activities and fundraising events.

Highlights included the Poppy Appeal which raised more than £72,000, a charity cycle from London to Paris which both staff and students signed up to participate in, a charity trek to China for the first time and a raffle which raised over £15,000.

A number of annual favourites also helped contribute to the total, including Beer Keller, a Hunger Games inspired event and ‘Lost’ where students are dropped 100 miles away and have to hitchhike back for charity.

Vice President for Rag for this year, Danni Hitchins, said: “I am so proud of everyone involved in Loughborough Students Rag this year. It has been a tough year for us but the team has handled it all so well and the total they have raised is truly incredible.