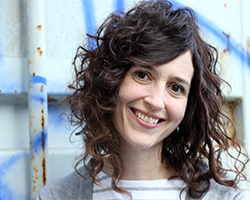 A Loughborough University academic, whose pioneering research resulted in a new approach to communication training, has been awarded a WIRED Innovation Fellowship for 2015.

Elizabeth Stokoe, Professor of Social Interaction in the Department of Social Sciences, is one of 14 Fellows to be selected by WIRED as part of its celebration of forward-thinking innovators who have the ‘potential to make a significant impact on the world’.

Professor Stokoe’s ground-breaking research uses conversation analysis to understand the organisation of communication in different interactional settings, including mediation, medicine and police interviewing. Supported by the Economic and Social Research Council (ESRC), she has developed the Conversation Analytic Role-play Method (CARM) to provide a research-based alternative to more traditional methods for communication training.

CARM can be adapted for use in any workplace or institutional encounter, and uses audio and video recordings of real-time, actual encounters to identify conversational problems and roadblocks as well as effective practices for avoiding and resolving them.

In honour of her acceptance onto the Fellowship programme, Professor Stokoe has been invited to speak about the science of conversation on stage at WIRED2015 on 15-16 October in London. She will be following in the footsteps of a number of high profile past speakers including musicians Björk and Will.i.am.

Professor Stokoe said: “It’s amazing to find out that I’m one of the lucky recipients of this year’s WIRED Innovation Fellowship, and I’m really excited to speak about the science behind effective communication at WIRED2015.

“CARM has attracted numerous accolades and substantial public interest, and I have spoken about this work to audiences in a variety of settings from Tatler magazine to the Royal Institution. CARM presents a challenge to traditional forms of communication training; it is a process of turning our ordinary life conversations into something different to look at and learn from.”

The WIRED Innovation Fellowships allow WIRED to discover innovators and creative talents from around the world. Competition is fierce among the emerging innovators in science, technology, design, culture, business, the arts, and other fields covered by the magazine, who both excited in their fresh and energetic approach, and who have achieved a proven track record of early success.