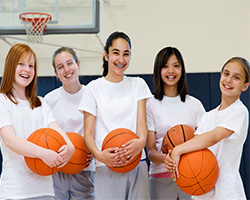 Loughborough University researchers will measure adolescent girls’ physical activity levels as part of a £600,000 investigation into the effectiveness of a dedicated school-based programme.

Experts at the University of Leicester’s Diabetes Research Centre and researchers from Bangor University and the University of Stirling are also involved in the investigation, after funding of £599,444 was secured from the National Institute for Health Research (NIHR) PHR Programme.

The research team has joined forces with the Youth Sport Trust to test the effectiveness of the Girls Active school-based physical activity programme, which provides training, resources and support for teachers to think about the way in which they deliver physical activity, sport and PE in their schools.

The study includes measuring the physical activity levels of approximately 1,600 girls aged 11 to 14 years[1] using a physical activity monitor attached to their wrists. The participating girls are also required to complete questionnaires about their feelings towards physical activity, sport and PE.

If the research reveals Girls Active to be a success and value for money, it is hoped that the programme could be rolled out to all secondary schools in the UK.

Dr Lauren Sherar, Senior Lecturer in Physical Activity and Public Health at Loughborough University, said: “This study presents us with a golden opportunity to see whether young girls’ attitudes and behaviour towards physical activity and sport can be changed, by encouraging them to become more active and healthier as they enter adulthood.

“Girls Active could be the catalyst for a culture shift and this research brings us one step closer to unlocking the key to encouraging adolescent girls to stay active.”

Deirdre Harrington PhD, Lecturer in Physical Activity, Sedentary Behaviour and Health at the University of Leicester who played a part in helping to secure funding for the study, said: “The young people have been really interested in the research process and ask some great questions about what we are doing. Although some are initially nervous about being involved in a study, they soon are excited when they see how friendly and open the whole research team are.

“The school leads realise what a valuable piece of work this is. Even with the time pressure and exams looming they have accommodated us in whatever way they can as they want to support their young girls in becoming and staying active.”

Douglas Keast, Assistant Principal and Director of Sport at Crown Hills Community College, the hub school for this study, said: “This is an exciting initiative which targets the issue of lower physical activity levels of girls in secondary schools, offering participating schools a huge amount of support from key experts.

“The programme challenges schools in terms of their current practice and helps create a plan which uses the student voice to shape the physical activity and sport specific to their context. This personalised approach has been embedded at Crown Hills with a hugely positive impact in terms of increasing girls’ physical activity levels.”

Chris Wright, Head of Health and Wellbeing at Youth Sport Trust, added: “PE and sport have many significant benefits for girls across all areas of their lives – for their physical and mental health, leadership skills, confidence and academic attainment. However, for some girls, PE and sport at school feels awkward, uncomfortable and irrelevant so they are unable to access these benefits.

“Girls Active is designed to help teachers and girls work together to change the culture of PE and sport in their school, so all girls see being active as a part of who they are and what they do. It provides teachers with training and ongoing support, and girls with inspiration and resources to lead that change. This research is vital as it will provide us with evidence and support to deliver effective and impactful programmes with lifelong benefits.”

[1] A total of 20 Midlands-based schools are involved in the study, including schools in Leicester, Leicestershire and Rutland.

The National Institute for Health Research Public Health Research (NIHR PHR) Programme was launched in autumn 2008. It commissions research to evaluate public health interventions, providing new knowledge on the benefits, costs, acceptability and wider effect of non-NHS interventions intended to improve the health of the public and reduce inequalities in health. The scope of the programme is multi-disciplinary and broad covering a range of public health interventions. The PHR Programme is funded by the NIHR, with contributions from the CSO in Scotland, NISCHR in Wales and the HSC R&D Division, Public Health Agency in Northern Ireland.

The National Institute for Health Research (NIHR) is funded by the Department of Health to improve the health and wealth of the nation through research. Since its establishment in April 2006, the NIHR has transformed research in the NHS. It has increased the volume of applied health research for the benefit of patients and the public, driven faster translation of basic science discoveries into tangible benefits for patients and the economy, and developed and supported the people who conduct and contribute to applied health research. The NIHR plays a key role in the Government’s strategy for economic growth, attracting investment by the life-sciences industries through its world-class infrastructure for health research. Together, the NIHR people, programmes, centres of excellence and systems represent the most integrated health research system in the world. For further information, visit www.nihr.ac.uk.

This article presents independent research funded by the National Institute for Health Research (NIHR). The views expressed are those of the author(s) and not necessarily those of the NHS, the NIHR or the Department of Health.

The NIHR is funded by the Department of Health to improve the health and wealth of the nation through research. Since its establishment in April 2006, the NIHR has transformed research in the NHS. It has increased the volume of applied health research for the benefit of patients and the public, driven faster translation of basic science discoveries into tangible benefits for patients and the economy, and developed and supported the people who conduct and contribute to applied health research. The NIHR plays a key role in the Government’s strategy for economic growth, attracting investment by the life-sciences industries through its world-class infrastructure for health research. Together, the NIHR people, programmes, centres of excellence and systems represent the most integrated health research system in the world. For further information, visit www.nihr.ac.uk.

National School Sport Week is a celebration of PE and school sport with almost 5,000 schools across the country taking part. Since 2009, 9.6 million young people and 22,000 schools have taken part in National School Sport Week. This year schools are being urged to devote a full week to sporting themes and events and encourage all their young people to take part in five hours of PE and sport. For more information, click here.

The Youth Sport Trust is a national charity that is building a brighter future for young people through PE and sport. Through 20 years of experience we have developed a unique way of maximising the power of sport to grow young people, schools and communities through the development of qualities including creativity, aspiration, resilience and empathy.