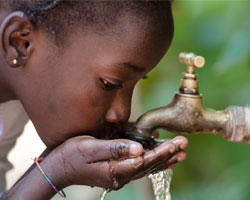 An international conference being held at Loughborough University later this month is set to examine the issues of global water supply and sanitation.

The conference is being hosted by the University’s Water, Engineering and Development Centre (WEDC), one of the world’s leading education and research institutes on water, sanitation and emergency relief.  WEDC experts will be joined by other top specialists in the sector including from UNICEF and WaterAid.  The week-long event will take place between 27-31 July.

The provision of safe and sufficient drinking water along with adequate sanitation and hygiene is key to supporting the achievement of many of the Millennium Development Goals, established following the Millennium Summit of the United Nations in 2000.   A focus of the conference will be to reflect on progress that has been achieved and discuss challenges that still remain.

The event will include three days of presentations and two days of workshops designed to develop skills and share knowledge. Speakers will discuss topics ranging from the role of water and sanitation in an Ebola treatment centre to designing simple hygiene promotion campaigns, whilst workshop themes include disaster risk reduction and effective well construction.  The conference will also involve a full programme of side events on subjects including managing activities in fragile and conflict affected areas, the challenges of sustainability and managing finance of programmes.

As part of the conference two public lectures will be held.  On Thursday 23 July Andrew Cotton from WEDC will be joined by former colleague, Darren Saywell to discuss the topic: Urban sanitation in the Global South: It shouldn’t be rocket science.  On Monday 27 July Sam Kayaga from WEDC will co-host a lecture with Silver Mugisha from the Uganda National Water and Sewerage Corporation which will consider: The Story of Water in Uganda.

Anne Blenkinsopp, WEDC Leader and conference manager comments:  “Over the last 15 years millions of people have gained access to drinking water, yet millions more people still do not have access to clean water and adequate sanitation and continue to die from preventable diseases related to poor water and sanitation services.   Our conference is an opportunity to reflect on achievements, consider what we have learnt, share best practice and crucially, discuss how to tackle the challenges still ahead of us.”

The conference is the 38th international conference organised by WEDC.  It is only the sixth time it has been held in the UK.  The event typically attracts over 400 delegates from as many as 40 countries across the world.  Further information on the conference and the public lectures is available here