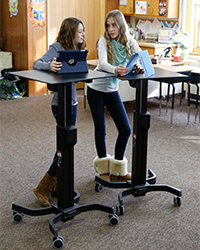 Founded in 2007, the Bradford Institute for Health Research (BIHR) has created a distinctive ethos and environment for conducting high-quality applied health research that makes a difference. Part of the local NHS and embedded in the Bradford multi-ethnic community, BIHR conducts world-leading research in partnership with universities.

Ergotron, Inc., a subsidiary of Nortek, Inc., is a global manufacturer of leading digital display mounting, furniture, and mobility products that have been improving the human interface with digital displays for over 30 years. Ergotron's products incorporate patented CF lift and pivot motion technology to achieve less effort and more ergonomic motion for a healthier and more interactive user experience when viewing any digital display. Whether to enhance computing wellness or entertainment excitement, improve workplace productivity or create business process efficiencies, Ergotron's products are positioning your digital world. Ergotron is headquartered in Saint Paul, Minnesota, with sales efforts in Phoenix, Amersfoort, London, Tokyo, and Singapore.