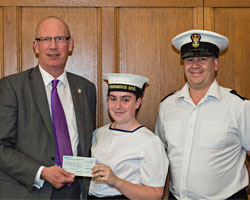 Loughborough University has supported ten local community groups in its latest round of community donations.

Donations were made from the Inside Out Fund, which is dedicated to helping members of staff who are involved in community or voluntary groups outside of work.

More than £4000 was awarded as part of the Inside Out Fund. By the end of the year, the University will have donated £200,000 to help and support local groups.

The University’s Vice Chancellor, Robert Allison, presented the cheques at the ceremony held earlier this week.

Stakeholders Relations Manager, Alison Barlow, was also present at the ceremony. She commented: “We’re thrilled to have supported staff once again through the University’s Inside Out Fund. A lot of our staff are involved in some fantastic community groups and voluntary causes outside of their daily jobs, it’s important for us as a University to acknowledge this and take time to help and reward them.”