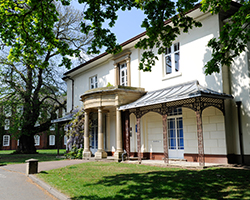 Loughborough student hall of residence, Harry French, is amongst the StudentCrowd Best 50 Halls

Loughborough University is amongst the top five UK universities according to online review platform, StudentCrowd.

Launched in 2014, the website provides students with the perfect arena for sharing their reviews of just about everything.

Since then, more than 15,000 reviews have been posted and there are over 11,000 active StudentCrowd members sharing their opinions on universities, courses, hall and rented accommodation, placements, part-time jobs, and clubs and societies.

As well as providing a place for students to share their thoughts and help each other choose where to study and live, StudentCrowd provides useful articles to support this crucial decision-making process. Most recently, it launched the Best 50 Halls Awards 2015, and three of the University’s student halls of residence feature – Falkner Eggington, Harry French and Rutherford.

Last month, the team expanded with the appointment of five student interns, all from Loughborough University. After receiving digital marketing training, the interns have already made a huge impact, contributing to the Best 50 Halls Awards campaign.

The company successfully applied to the Seed Enterprise Investment Scheme earlier in the year. Having secured £50,000, a further £100,000 is expected by the end of the summer to support the company’s continued growth.

Co-founder, Paul Humphreys says: “We’ve enjoyed building StudentCrowd, and are delighted to be helping hundreds of students every day to make the best decisions about university life.”