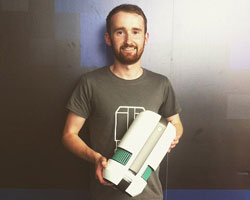 Loughborough University Design School student Henry Buckley has won a top award at this year's New Designers exhibition in London thanks to his clever and innovative design project.

Henry, who is a Product Design and Technology student, won the Virgin Atlantic design award for his ‘MONO’ design, a modular domestic appliance range for urban micro apartments.

After learning that 54 million tonnes of electronic waste are produced worldwide each year, Henry was inspired to create a brief and develop a prototype to lower electronic waste by reducing the number of components and amount of materials used across certain products.

The clever design allows a range of products to be used with one single plug-in and play power module. Appliances are automatically recognised by the power module and can deliver speed control as appropriate, reducing the amount of electronic waste produced.

So far, three products have been developed as part of the range including an air purifier, electric fan and hand vacuum cleaner.

As part of Henry’s award, he will also receive two weeks work experience in the Virgin Atlantic Customer Experience Design Department. He commented: "As a student embarking on a design course at Loughborough University, a key aspiration is to exhibit at New Designers. Along with many others, I have worked really hard throughout my final year project. Being selected for New Designers, and ultimately winning an award, is absolutely amazing, making all the effort that I have put in worthwhile."