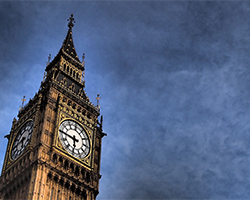 Political strategists, journalists and academics gathered in Westminster this week for a Loughborough University conference focussing on the media coverage of the 2015 General Election campaign.

Held over two days on 13-14 July in London, the Political Studies Association’s Elections, Public Opinion and Parties (EPOP) Group Conference, organised in partnership with Ipsos MORI, offered a fascinating insight into the highs and lows of the election from those directly involved in the campaign and its media coverage.

Guest speakers from political parties gave candid insights into how they fought the campaign and media perspectives were well represented by senior representatives from Ofcom, the BBC, ITV, The Evening Standard, Channel 4 News and Saatchi and Saatchi. The pollsters also came together to reflect on the lessons learned from this election.

Professor of Communication and Media Analysis David Deacon and Professor of Political Communication Dominic Wring, both from Loughborough University’s Communication Research Centre, presented the findings of their news audit of the General Election campaign. The audit, which has been carried out by the Centre for every General Election since 1992, detailed what print and broadcast media coverage the parties, their policies, MPs, leaders and their partners secured in each week of the 2015 campaign.

Speaking about the Conference, Professor Wring said: “It was great to hear the various speakers offer their take on the General Election and answer questions from their peers, academics and members of the public.

“The Conference provided a unique opportunity for the key strategists to come together and share their experiences of the party campaigns from the inside.

“For their part, the journalists told us how frustrating it was to deal with politicians determined to exert control over the news agenda by limiting the ability of reporters to ask the awkward questions they believed the public wanted answering.

“And in response to one of the major stories of the campaign, the shock result, the pollsters offered some reasons for why few had been able to forecast the surprise Conservative victory.”

Michael Crick, Political Correspondent for Channel 4 News, said: “The analysis of an election would be incomplete without a proper analysis of the media, and what’s fascinating is to see how that changes over time.”

Martin Moore, Director of the Media Standard Trust, said: “This work by Loughborough University around the election has been extremely important in providing a foundation for an awful lot of work that’s done. There’s clearly a huge amount of information now about elections, not just mainstream media information, but much broader, so having an anchor from Loughborough University is extremely helpful. The research quality has been high; it has been referenced in mainstream news outlets and we’ve used some of the broadcast analysis for our own analysis.”

Simon Atkinson, Assistant Chief Executive at Ipsos MORI, added: “Loughborough University has given us an historic comparative record and that’s so important when we’re studying General Elections because you’ve got to be able to put it in to context. So it’s really key that this work carries on and that we are able to continue to build that complete picture.”

More information about the conference, including a full list of speakers, can be found here.