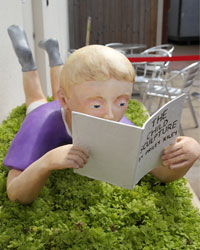 ‘The Child Sculpture’ which is of a young boy reading a book, was created for this year’s Loughborough in Bloom campaign and was unveiled just in time for a visit by the Bloom judges.

The sculpture is a collaboration between Charnwood Borough Council and Loughborough University and has been placed outside the Carillon Court Shopping Centre’s Market Street entrance.

Paula, who goes by her artist name ‘Priley Riley’, was selected to design the sculpture after submitting her proposal earlier this year.

Priley, who has just finished the second year of her Fine Art degree, said: “I wanted to create something which represented the Ladybird Book’s centenary, so I thought a simple concept of a child reading a book showcased this perfectly.

“To make the sculpture, I first constructed an armature which I modelled the original clay child over. I then cast this clay child in plaster and used the plaster moulds to cast resin into. The final sculpture, therefore, is a glass fibre resin cast. The sculpture itself took months to make and I actually started making it back in January around the same time I submitted my proposal.

“I’m absolutely delighted that I was chosen to design and create the sculpture, I have wanted to be an artist ever since I was a child so this is an absolute dream come true.”