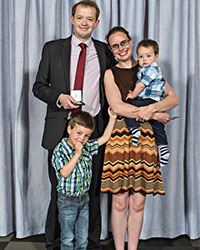 The Sir Robert Martin University Prize has been awarded to PhD student James Pearson for outstanding academic and non-academic achievement.

School of Civil and Building Engineering student, James, has been recognised for his exceptional academic achievements and involvement in non-academic activities that benefit the local community and the wider population.

Having left college with below average grades in both his GCSEs and A-Levels, James was told that no University would ever accept him. His lack of direction led him to become a manager for the Youth Hostels Association, during which he developed a passion for aviation.

Determined and convinced of his own ability, James approached the University at the age of 25 and, while he did not meet the entry requirements to study Air Transport Management, convinced lecturers of his true capability. Since joining the University, he has demonstrated this capability at BSc, MSc and PhD level.

Throughout his PhD, James has produced multiple journal articles and has written for a number of magazines, blogs and conference presentations. Beyond his academic achievements, James campaigns through demonstrations with Amnesty International and Reprieve and has spent 11 months working with orphanages in Plodiv, Bulgaria and Cairo.

Through his industry links, James has bought a variety of leading senior aviation figures to present to students at the University, including Ryanair’s former Chairman and the founder and CEO of bmibaby. During his MSc at Cranfield, James also organised English Heritage Tours for his fellow international students to help introduce them to some beautiful locations across the UK.

James has been successful in achieving all of this entirely of his own initiative, and while having two young children, his self-motivated attitude, excellent attitude to work and exceptional academic performance have been recognised in this award.

Vice Chancellor Bob Allison presented James with a medal, certificate and a cheque for £1,500 during the Summer Graduation period.

Speaking of his award, James said: “I was shocked but absolutely delighted to have won such a prestigious prize from a very well-ranked university.  I have enjoyed undertaking my BSc and PhD at Loughborough, and I am very pleased to have studied there.  My award goes beyond me: it demonstrates to all that with the right mind-set and willingness to standout in the eye of employers, achieving quite poor A Levels doesn't actually matter.  In fact, I am convinced it has made me more competitive and better.”

Senior Lecturer and nominator, Dr David Pitfield said: “James clearly shows that underperformance at a younger age may make very little difference overall. With the right mind-set and determination, he is now very motivated because of this. James is a deserving recipient of this prestigious prize and a positive signal to other people to achieve their best regardless of their start in life.”