Loughborough University subject areas rated amongst best in the world 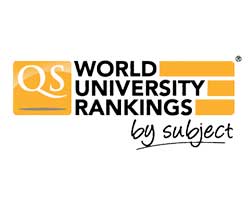 Two subject areas at Loughborough University were ranked in the top 50 in the world according to the QS World University Rankings by Subject carried out earlier this year.

Art and Design, which is offered through School of the Arts, English and Drama and Loughborough Design School and Communication and Media Studies, offered through the Department of Social Sciences both appeared in the top 50.

Art and Design ranked 40th in the international league table, with Communication and Media Studies following closely in 43rd place.

Two further subjects at Loughborough University Engineering (Mechanical, Aeronautical and Manufacturing) and Geography were ranked within the top 100 globally.

Professor Jonathan Potter, Dean of the School of Social, Political and Geographical Sciences, added: "Our recent rankings in the Complete University Guide, where we were rated 2nd in the UK, in the Research Excellence Framework, in which we ranked 2nd in the UK in terms of intensity, and now the QS World University Rankings by Subject confirm Loughborough University's significant place in Social Science and Communication.”