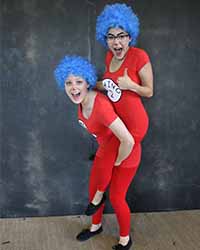 Accidentally on Purpose Productions, founded by alumna Alice Dean and PhD student Lyndsey Bakewell, will be performing at the Edinburgh Fringe Festival this year.

The festival, taking place between 7-31 August, is the largest arts festival in the world and takes place every August for three weeks.

Among the 3,000 events featuring in this year’s line-up are three productions from Accidentally on Purpose. The productions Seussical the Musical, I love you, you’re perfect, now change and Corium are all directed by University Alumni and cast with students currently studying at Loughborough.

Seussical the Musical is a fantastical, mystical, magical, musical extravaganza. Seussical takes you into the world of Dr. Seuss and weaves together his most famous tales and characters from at least fifteen of his original children’s books.

This is a musical comedy revue that explores the ups and downs of love, romance and relationships. It depicts everything you have ever secretly thought about dating, romance, marriage, lovers, husbands, wives, and in-laws, but were afraid to admit.

Corium is a new piece of physical theatre that presents themes of love, regret and longing. Two couples. Two troubled marriages and a missed opportunity. When four friends are reunited and old temptations surface, they begin to question the strength of their separate marriages. Will former passions resurface and destroy the foundations of what they already have?

Becky Lauder-Fletcher, Director of Seussical the Musical and Marketing Intern for School of the Arts, English and Drama, said: “Performing at the Fringe is an excellent opportunity for our Loughborough students. It increases confidence and provides a taste of working in professional theatre. We are very excited for all our hard work to be finally showcased.”

You can see all performances by Accidentally on Purpose Productions from 17th August- 29th August at Greenside Venues, Nicholson Square.