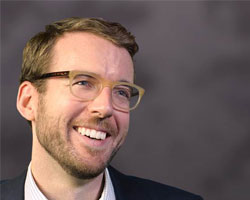 The co-chairman of a company focused on the connection between software and the physical world, will visit Loughborough University next month (Tuesday 5 May) to discuss why technology’s future is in physical devices.

Jon Bruner, who works for O’Reilly Solid, will explain Silicon Valley’s current obsession with hardware and the Internet of Things. Jon will deliver the lecture “A return to atoms: why technology’s future is in physical devices”.

Prior to working for O’Reilly, Jon was the data editor at Forbes Magazine where he combined writing and programming of research subjects ranging from the operation of Columbia River’s dams to Migration within the United States.

The lecture is being hosted by the Centre for Doctoral Training in Embdedded Intelligence, a partnership between Loughborough and Heriot-Watt University funded by ESPRC.

Dr Donna Palmer, CDTei Centre Manager, said: “Jon is the author of the seedcorn document ‘Machines are talking’ that revolutionised the Embedded Intelligence field in 2013. Our research is at the forefront of this field, spanning all sectors and industries, and we are absolutely delighted that Jon will be delivering our first Annual Foresight Lecture.”

Jon will lead the free lecture at 1:30pm in the Wolfson Building on Tuesday 5 May. To confirm and book your place, please email cdt-ei@lboro.ac.uk

For more information about the centre and to view current PhD funding opportunities please visit www.cdt-ei.com