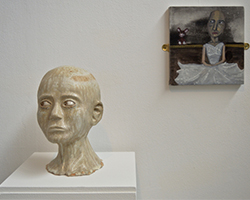 Throughout April, fourteen Loughborough University students are showcasing their work as part of the ISC International Sculpture Day, 2015.

The annual event, which officially takes place on Friday 24 April, allows sculptors worldwide to gain recognition for their contribution to the arts.

Scheduled to have over 50 events across the globe, with representation in over 12 countries, this celebration of sculpture will have a projected audience of over 30,000 attendees.

A pop-up exhibition has been set up on campus at the Fine Art Gallery and displays the work of School of the Arts students. They include:

John Atkin, Reader in Fine Art and University event organiser, said: “I am proud to have been invited to put together a concept for this global event. The ISC has a long history of supporting student practice and I have taken this opportunity to promote the work of several students on the Fine Art Programme, whose work articulates the ambitions of Sculpture within contemporary worldwide practice.

“The students involved in this exhibition contribute to the ethos of a making culture that utilises both cutting edge digital technologies as well as more traditional modes of practice: asserting themselves as independent thinkers within an ever expanding creative community.”