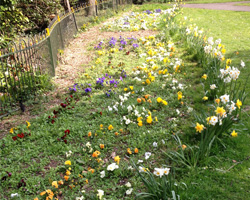 Representatives from Loughborough University have presented two local residents with a cheque for £100 to help support their gardening project.

Harry and Pat Cook, of the Forest Road Green Belt Gardeners, will use the contribution to spruce up an old footpath by planting crocuses and spring bulbs in time for next summer.

The couple, who are regular contributors to Loughborough in Bloom, applied for funding through the University’s Community Donation Fund programme.

Today, Friday 24 April, Harry and Pat were officially awarded with their £100 cheque from the Open Fund.

The Open Fund is one of five funding programmes available to the local community.

Harry Cook said “We’re absolutely delighted to have received the funding from Loughborough University, it’s really going to make a difference to our project this year.

“The Donation Fund is a fantastic idea which really does help local and voluntary groups in the area. It’s great to have the university really supporting what the community does."

Alison Barlow, Stakeholders Relation Manager at Loughborough University, said “We’re very pleased to be able to help Harry and Pat with their project. For us this is what the Community Donation Fund is all about.

“We want to be able to back members of the community who are trying to make a difference. It’s great to see just how far a donation can go. We’re excited to watch the process from start to finish.”

The University's Grounds and Gardens Team have also helped Harry and Pat with their gardening endeavours by providing them with bulbs and seeds.