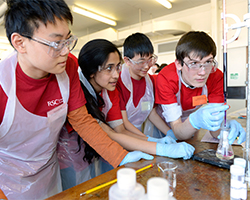 Loughborough University will host the national final of a prestigious chemistry competition designed to inspire the next generation of young scientists.

More than 30 teams of pupils from across the country will battle it out for the top spot at the 2015 ‘Top of the Bench’ competition, run by the Royal Society of Chemistry (RSC), on Saturday 25 April, after successfully making it through the regional heats.

The 13 to 16-year-olds’ factual chemistry knowledge will be put to the test as they work together in their teams to solve a practical chemical problem. This is the third year running that the University’s Department of Chemistry has hosted the final which will run from 10.30am to 4.30pm.

Professor Mark Biggs, Dean of the School of Science at Loughborough University, said: “We are delighted to host the national final of Top of the Bench which provides a fantastic opportunity for school children to further their education and even consider developing a career in chemistry.

“The competition helps to grab children’s attention at a young age, by opening their eyes to the world of chemistry and fuelling their curiosity through written and practical activities. It also acts as a fantastic motivator to help develop both awareness of, and a long-term interest in a subject which has so much to offer.”