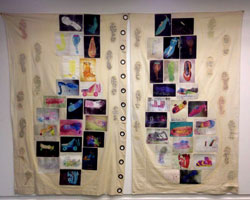 A community arts group who received funding from Loughborough University have showcased a textiles exhibition.

CAFE_space, based at Charnwood Arts, displayed their “In Her Shoes” textiles exhibition at Leicester’s Peepul Centre and Glebe House, Loughborough.

The project was funded by a £700 grant from the University’s Community Donation Fund. The University runs its annual donation fund programme to help community based groups hold events, plan schemes and purchase materials.

Using the donation, the group worked with young adults with learning difficulties to create content for the exhibition.

Volunteer Jack Barsby and Loughborough University MA student Sarah Green helped with the project by enhancing images and printing them onto banners.

The arts group also collaborated with poet Lydia Towsey and worked with mental health well-being group Khushi for the first time, to make a body of poems and embroidery to go with the artwork. Poems were then embroided onto the sole of shapes to complete the exhibition.

Jemma Bagley, Community Arts Co-ordinator at Charnwood Arts and Loughborough Textile Design graduate, said “We’re absolutely delighted to see the work of so many participants brought together into these final pieces, working on a project that brings people together like this is always rewarding. It's great that the Peepul Centre provided us with such a fanastic exhibition space.

“Everyone involved really enjoyed themselves and felt they got something out of it which is great. The CAFE_space project has also helped us to build a great relationship with White Acres in Shepshed, a specialist service for adults with learning disabilities.

“We can’t thank Loughborough University and their Community Donation Fund enough, it’s great to have the University supporting community projects.”

"We want the Fund to be a support system for local groups who may need that extra helping hand and it’s great to see how far a donation can go.

"The fact CAFE_space used the funding in such an innovative and creative way shows how much talent there really is in the community."