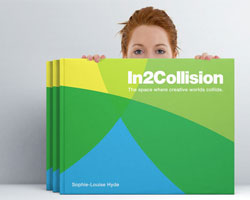 Loughborough University graduate, and founder of The Student Wordsmith, Sophie-Louise Hyde has launched a new parent-brand In2Collision to showcase her ever-growing, award-winning, literary and publishing platform.

Described as ‘the space where creative worlds collide’ In2Collision is home to a number of innovative projects that aim to inspire both a creative community and maintain professionalism.

Throughout 2014, The Student Wordsmith provided younger audiences with two successful national competitions. Its anthology, You is for University - now in its second edition - is now available on Amazon. The venture saw Sophie partner with mental health charities and have her talents recognised as winner of the Graduate Enterprise category in the University’s annual Enterprise Awards.

Sophie, who has recently graduated from the Studio, Loughborough’s graduate commercialisation hub, now offers professional editing, copywriting, and publication preparation as part of this new venture. She combines these professional services with a part-creative PhD at Loughborough.

Through In Verbatim, Sophie aims to engage new audiences with poetry and give a voice to the individuals and communities involved in or affected by the riots across England in 2011.

Launching later in 2015, new development, The Combined Collective, will focus on the importance of collaboration across the art forms. It will encourage collectives to become creative communities through the medium of public/private events, exhibitions and portfolio services alike.