Loughborough's talented designers ready to take on the UK's best 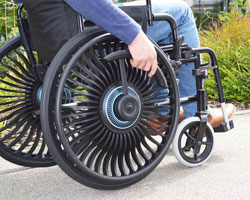 Wheels that power wheelchairs, a tea-maker that does not need tap water, and a device that turns insects into palatable protein.

They are three of the 16 fabulous inventions by final year students at Loughborough University’s Design School which will be showcased at the UKs most important graduate design exhibition in London next month.

All will be hoping to attract the attention of UK and international manufacturers at New Designers, which takes place at the Business Design Centre from July 2-5 and attracts more than 3,000 of the most talented newly-graduated designers.

The 16 were chosen from 105 students whose inventions were showcased at the Design School’s annual degree show from Friday, June 13 to Tuesday, June 17.

Lecturer Ian Storer says the quality of designs by the students has been extremely good this year.

He said: “Due to the high standards achieved by our graduating students, choosing just 16 to exhibit at New Designers has been difficult.

“If we had the space and the budget we’d like to take all the projects.

“All the projects are developed to the stage where the innovative features can be thoroughly tested through working prototypes. This makes the Loughborough Design School projects stand out at New Designers.”

Fraser Hamilton’s  battery powered wheelchair  wheels give the user the option of manual or power-assisted propulsion.

The Bru tea-maker was designed by Stuart Antill, and is aimed at arthritis sufferers who find it difficult to carry kettles full of water. It draws water from the air so that it never needs filling up.

Thomas Arnold’s PACK-pro steams and dehydrates insects to create a protein rich powder than can be added to traditional meals to make them more nutritious.

Other interesting products include a portable fire extinguisher that allows rapid response at road traffic accidents, a quad bike simulator, and a walking aid to help people with Multiple Sclerosis who suffer from drop foot to easily ascend stairs.

The exhibition, says Ian, is a fantastic advert for the students and the Design School, leading to job offers and collaboration with industry, and also boosts undergraduate recruitment.

Last year, for instance, Kristian King, who designed the Munchee-self-rewarding children’s dining plate, landed a job with Dyson, and Guy Newsom, who came up with the Clipa-hot beverage sailing product, now works at Vax.

“The show gives us a great opportunity to display our work, meet prospective students and catch up with previous graduates and industry contacts.”

The main image is of The Bru tea-maker.