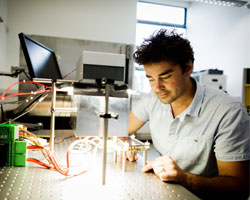 A project led by Loughborough University has thrown its financial muscle behind a team at Oxford University that is making ‘astonishing’ progress in the development of solar power.

The SuperSolar Hub is backing Oxford and its spin-out company, Oxford Photovoltaics Ltd, who are using perovskite materials to make photovoltaic solar cells.

Loughborough is the lead partner in a five year project called the Supergen SuperSolar Hub, which involves seven other universities and is funded by the Engineering and Physical Sciences Research Council (EPSRC).

Its aim is to improve the efficiency of next generation photovoltaic devices.

And the Hub believes that the work being done at Oxford University is a real UK success story.

As a result, they want solar researchers to compete for funding which would allow them to better understand and improve solar cells based on organo-metal halide perovskite light absorbing materials.

The deadline for research proposals for the Hub’s flexible funding is Friday June 6.

Mike Walls, Professor of Photovoltaics at Loughborough University and the Supergen SuperSolar Hub’s Director, said: “Compared with the gradual improvements made in other photovoltaic technologies, the progress made with perovskite solar cells has been astonishing.

“We want to use the resources of the SuperSolar Hub to back this UK success.

“EPSRC provided the Hub with research funding which we could employ flexibly and quickly if a suitable opportunity arose.

“UK universities have a strong research base in all aspects of photovoltaics and we have put out a call for research proposals that will complement the work being done at Oxford.  We want to maintain our lead in this technology.”

The decision by the Supergen SuperSolar Hub is a real coup for researchers at Oxford University, led by Professor Henry Snaith.

The university researchers discovered that perovskite absorbers are capable of high conversion efficiencies.

In just two years, they created photovoltaic devices with champion efficiencies higher than 17 per cent.

These perovskite materials are capable of solution processing and can be applied to flexible substrates including polymers and metal sheet.

The perovskite materials can also be deposited on to glass. Semi-transparent windows which can produce power are another exciting possibility.

Oxford Photovoltaics Ltd was established to exploit this and other applications of the technology.

The company has negotiated an exclusive license to patents held by Oxford University and has successfully raised venture capital to fund its development phase.