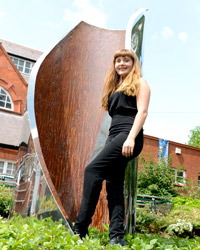 The sculptures, representing denial, anger and the acceptance of loss, have been designed by Amelia Seren Roberts to mark the centenary of the war’s outbreak and honour all those who gave their lives.

Amelia is a second-year fine art student from the University’s School of the Arts.  She was commissioned to produce the pieces as part of Loughborough in Bloom.

The new sculptures, which sit in the flower beds in front of Charnwood Museum, will link WWI exhibits from the Museum and the Carillon.  They have been sponsored by Quadron Services Ltd.

Amelia said: “I’m proud to have been invited to participate in such an important project, not only as I have gained valuable experience of delivering a public art commission on a high profile site, but also because of the importance of such a monument in the remembrance of an experience that continues to exist in the cultural memory of our communities.

“I’m incredibly grateful to Charnwood Borough Council for their enthusiastic support of the arts in Loughborough and their continued involvement with the University”.

Amelia visited both the Carillon and Charnwood Museum as research for the pieces, as well as speaking with Loughborough library’s local studies facility.

The sculptures are designed to encourage reflection on the historical, and current psychological experience of loss that many are faced with in times of conflict.

Each of the pieces will represent a stage of mourning; the first symbolises the mourner’s rejection of loss, the second indignation and the third is acceptance and the commitment of the loss to memory.

Andrew Selby, Head of Department at the School of the Arts, commented, “Using contemporary public art to re-imagine the First World War not only commemorates an important milestone, but offers a focus to consider the enduring sacrifice that others have made for our collective good.”

Councillor Hilary Fryer, Charnwood Borough Council’s Cabinet Member for Cleansing and Open Spaces, said: “I am delighted that once again Queen’s Park is able to showcase student artwork and am pleased to see the First World War themes being carried throughout the park.

“The flower displays have proven very popular since the installation of local commissions and I am sure once again these sculptures will be a feast for the eyes.”

Bernard Sheridan, Quadron Contract Manager, added: “Quadron Services Ltd is delighted to sponsor the sculptural installations which enhance the seasonal bedding displays in Queen’s Park. These sculptures are a newly established tradition as part of the Loughborough in Bloom partnership, designed to enhance the floral display, encourage public art and challenge the students to deliver a public art commission as part of their course work. This year’s installation by Amelia is a thoughtful and poignant set of sculptures which are particularly apt for the park in this year which commemorates the start of the Great War. The sub-theme of reflection, the use of reflective surfaces will really enhance the floral displays.”